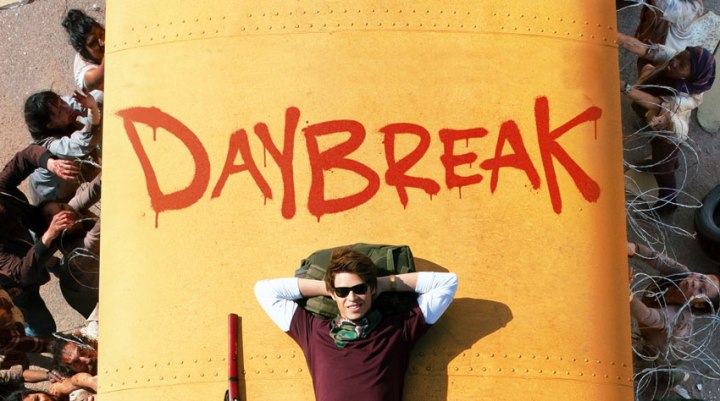 Now, I’m not a fan of Mad Max or anything to do with the apocalypse or post-apocalypse and yet, I found myself drawn to this story — mostly because I wanted my brother and dad to stop pestering me to watch it. I was surprisingly shocked when the pilot captured my attention and willed me to press that “next episode” button Netflix. Yep, I was hooked.

Daybreak is an adaptation from a graphic novel of the same name written by Brian Ralph. The tv series which was created by Brad Peyton and Aron Eli Coleite, tells the story of Josh Wheeler who is on a quest to find his girlfriend (ex-girlfriend?) Sam Dean in the aftermath of the apocalypse that left only teenagers (and 10-year-old girls?) alive.

With no adults to bring order to the town of Glendale, the high school students do what they do best — create cliques. The cliques, or tribes as they’re referred to in Daybreak, are all controlled by one dominate tribe — The Jocks. Sounds like high school, doesn’t it?

Our protagonist, Josh, has decided the best way to survive the apocalypse is to keep to himself, avoid all tribes and not be a dick. Except, he doesn’t want to be completely alone. No, he wants and needs to find his true love, Sam Dean. Of course, hunting down your true love in a town you’re relatively new too and that’s crawling with Ghoulies (Daybreak’s version of zombies — who are all adults who repeat their last sentence over and over again) is not an easy task for a loner. Despite, his better judgment Josh does end up cultivating his own tribe of sorts out of the misfits roaming around Glendale. Together they form the tribe Daybreaks.

Get the gist? Good.

Now, here’s my review of Daybreak.

Spoilers ahead. Proceed with caution.

While I admit the pilot was interesting, the only reason I tuned in to the second episode was because of the cliffhanger in the pilot. Episode 2 is what really got me hooked on this show because I wanted to learn more about our core characters.

This is the episode where we start to understand who our characters are. We get to see Josh begrudgingly start to bond with his former bully Westly, who has taken on a new outlook on life that has to lead him to become a rōnin searching for redemption, an Angelica, the 10-year genius and pain-in-the-ass Josh occasionally babysat. Also added into this found-family mix, is Eli Eli Cardashyan (yes, it’s pronounced the same way. No, they’re not related) who has claimed the Glendale mall as his own sanctuary and is not happy about the other’s presence. And I can’t forget about the “Witch” who is better known as former-biology teacher Ms. Crumble who has somehow survived the apocalypse and isn’t a total Ghoulie like the rest of the adults in Glendale.

What’s so special about this episode is that we get a sense of who these characters are and the struggles they’ve been facing on their own. Let’s face it, no one wants to be alone especially in a post-apocalyptic world that run by teenagers. It also really sets up the different stories that are going to be explored over the course of the 10 episodes.

This episode is the starting point. The characters are nervous around each other. Some still want to be alone (Josh), others desperately want to belong to a tribe (Angelica) and some just want their mall back (Eli). This is the episode that sets up the before so that the conclusion, in the end, will show us that these characters have undergone a change.

This is the final episode of the series and honestly, it should be my favorite. Obviously, it’s not. Is there action? Yes. Is there a resolution? Yes. The biggest problem I had with this episode was that it didn’t answer any questions.

Daybreak poses lots of questions over the 10 episodes. Who started the nuclear bombing? Why did only teenagers (and Angelica) survive? Is it the same everywhere? Why did the adults turn into Ghoulies? Why didn’t Ms. Crumblr or Mr. Burr turn into Ghoulies? With so many questions, it’s an unfortunate disservice that the conclusion of Daybreak doesn’t answer one of these pressing questions.

For viewers of this show, this might be a shocking surprise. Ms. Crumble certainly wasn’t destined to become anyone favorite’s character. If anything, she was the comedic C plot to an already comical and dramatic a and b plot. And yet, here I am declaring her my favorite character.

Ms. Crumble is intriguing because she’s unlike any character we’ve ever seen before. Josh is basically this decade’s Ferris Bueller. Angelica is a modern Hit-Girl. Ms. Crumble is something totally different.

She’s also the character that really sticks to her values and inequity. Every other character slips up. Josh becomes a dick. Westly plans to kill despite his road to redemption. Even, Angelica gives up on her goal of creating a tribe with Josh and Westly by her side. Ms. Crumble, though, never goes back on her word. She has a few close calls but it never happens. She never eats a child.

What’s even more interesting is she could have been like Principal Burr. She had every reason to turn on the teenagers who tormented her for years and forced her to change her name to Ms. Crumble, but she doesn’t. She loves kids. She wants to help kids. Even with a blood-thirsty urge to consume her former students, she doesn’t.

She also has the single greatest line of dialogue I have ever heard. “My shit is like a Health Valley granola bar that feels solid, but when you open it up, there’s shit everywhere.”

Don’t get me wrong, she does have some faults — like her involvement with Principal Burr before the apocalypse, but her highs far outweigh her lows.

Sam Dean is Principal Burr’s go-to student. She’s the self-proclaimed “human sorting hat” when it comes to figuring out where kids belong in the social circles of high school. She’s the nice girl on campus and the it-girl after she makes a viral video of her randomly complimenting her classmates.

But is she really the nice girl we think she is? No, she’s not.

She lashes out at Josh and blames him for her new homecoming queen status since he’s the one who posted her video that went viral. Why else would she have asked him to film it if she didn’t want it to be posted?

And to top it all of, she goes around whining that no one knows who she really is but doesn’t bother to show them who she really is. Even Josh, her boyfriend who claims he’s in love with her, doesn’t get to know the real Sam Dean.

Since no one knows who the hell Sam Dean is, not even herself, her ending is confusing and slightly shocking. Is that who the real Sam Dean is?

Again, I don’t understand how a show that presents so many questions can leave so many unanswered. We literally do not know why anything is happening or how it’s happening. I get it, writers want to leave things open for a second season and we need cliffhangers. While that is the truth, they still could have answered at least one question.

And yeah okay, there’s Principal Burr’s crackhead theory that the teenagers are the only ones who survived because they got their HIV vaccine but it’s played for laughs. I certainly didn’t take it seriously. Nor would I be happy if that truly was the reason why all the teenagers were able to survive.

What’s the deal with Turbo? How did his face get messed up? Why doesn’t he talk? When he does talk, he bleeds, why?

Exceptions to the Rules.

Daybreak does an amazing job of establishing the world we are now in and the rules for that world in the first episode. And then, we’re presented with all these exceptions to the rules without an explanation.

If Jayden Hoyles was held back several times in high school, wouldn’t he be an adult? If he’s an adult he should be a Ghoulie. Why isn’t he? I certainly don’t know because it’s never even addressed.

What about Angelica? She’s just a 10-year-old kid. How did she survive? Are their other kids out there trying to survive without their parents? What about babies?

How about Principal Burr and Ms. Crumble? They were both adults that survived the apocalypse. And yet, they’re nothing like each other. Yeah, Ms. Crumble comes to the conclusion that she’s the way she is because she has suffered a traumatic brain injury but is that the truth? Regardless, how are they able to continue to survive?

The reason for the Nuclear War is never addressed.

It seems like a disservice for the show to not even mention or even search for the reason why the nuclear war occurred. Yes, the kids know it was all the adults’ fault but what caused it? Given the times we are currently living in, it would have been fun and interesting to see the kids come up with ideas on why the war started that parallel things happening in the real world.

I’ll admit at first I was skeptical of the extent that Josh broke the fourth wall. It was a carbon copy of Ferris Buller’s Day Off (and even borrowed some of his taglines) and seemed like a crutch the writers’ used to explain what was going on. Thankfully, it moved away from a crutch and became an amazing device.

I really loved that each character got their own version of a Fourth Wall Break that fit their personality. Josh had the standard, Ferris Buller one. It fit his character and eased us into this device in a way we were comfortable with. Our resident wild child and wannabe gangster Angelica took a different approached and borrowed from mob movies by narrating her episode with voiceovers. Westly’s episode was narrated by Rza, the de facto leader of the Wu-Tang Clan, and relied on Japanese animation to help get his point across. Ms. Crumble used flashbacks in the form of a zany multi-cam format to get her story across and Turbo addressed the camera directly relying on doodles on screen since he is mute.

Simply put, the soundtrack was amazing. Go stream it on Spotify!

Overall, Daybreak was entertaining but the conclusion left me annoyed and wishing for at least an hour of my time back. The series certainly ends with a hope for a season 2 but I’m not sure if I’d be invested enough to tune in.

Let me know your thoughts in the comments below.

Daybreak is streaming now on Netflix. You can catch the trailer for it here.